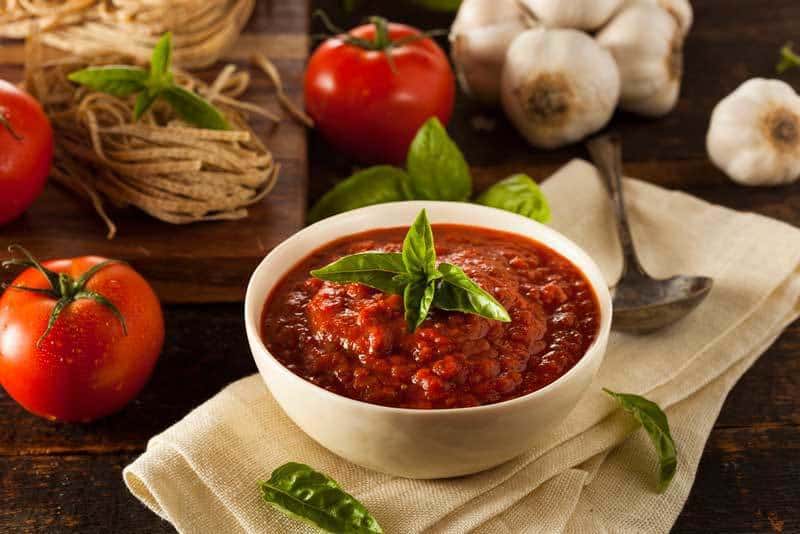 If you pay attention to your labels or make your own, no reason you shouldn’t enjoy it in a variety of dishes while you’re on the program!

Pasta sauce is a large overarching term for any sauce you’d typically serve, well, over pasta.

Typically these savory sauces are tomato-based with some sort of onion, garlic, herb and spice mixture that is a staple in Italian home cooking. The category “pasta sauce” also includes, however, vodka sauce, cream-based sauces, mushroom sauces, etc.

Marinara sauce is much more specific. While marinara sauce’s origins are somewhat unclear, it is thought to originate from Italian mariners voyaging back to their home country in the 18th century with a groundbreaking new discovery: tomatoes.

This classic sauce recipe varies a bit, but typically starts with a base crushed tomatoes, olive oil, garlic, chili flakes, basil, and salt. Notice anything exciting about those ingredients? Totally Whole30-compliant!

Ingredients to Watch Out in Marinara Sauce

As Whole30-ers, we are used to reading labels. Marinara sauce is no different! The most frequently spotted non-compliant ingredient in store-bought sauces is probably going to be sugar.

That’s right, sugar even sneaks its way into savory tomato sauce! This is typically used to balance out the acidity from the tomatoes—many recipes for homemade marinara even call for a pinch or two as well.

To make a recipe that calls for sugar compliant, don’t hesitate to simply leave out the sweet stuff.

The second most common offender is non-compliant oil. Many commercially produced marinara sauces will use soybean oil instead of olive oil to save some money and, as we know, soy is never allowed on Whole30.

Less commonly, jarred sauces may add nitrites, cornstarch, or MSG—all of which are banned on Whole30.

Also uncommon, but worth looking out for: sometimes wine is added to sauce for extra depth of flavor. As alcohol is also not allowed on Whole30, sauces with wine as in ingredient are still to be avoided, even if wine used only in small amounts in recipes.

These ingredients are not as common as sugar; however, it is best to read your labels to be extra sure!

Want to take a break from the chore of always reading labels at the store and have us do the work for you?

We’ve rounded up a couple of our favorite store-bought marinara sauces so you can focus less on scouring for icky ingredients and more on the delicious meal you’re going to make with your sauce.

What Can I Do With Marinara Sauce?

Without all the banned foods we usually eat this delicious sauce with, where do we even begin? Well, quite a lot, actually!

Looking to make your own sauce? Check out our Whole30 Pasta Sauce post for a simple, base recipe you can endlessly customize.

Have a secret marinara sauce recipe (that you’re willing to share)? What’s your favorite way to eat our favorite tomato sauce? Leave us a comment and let us know!