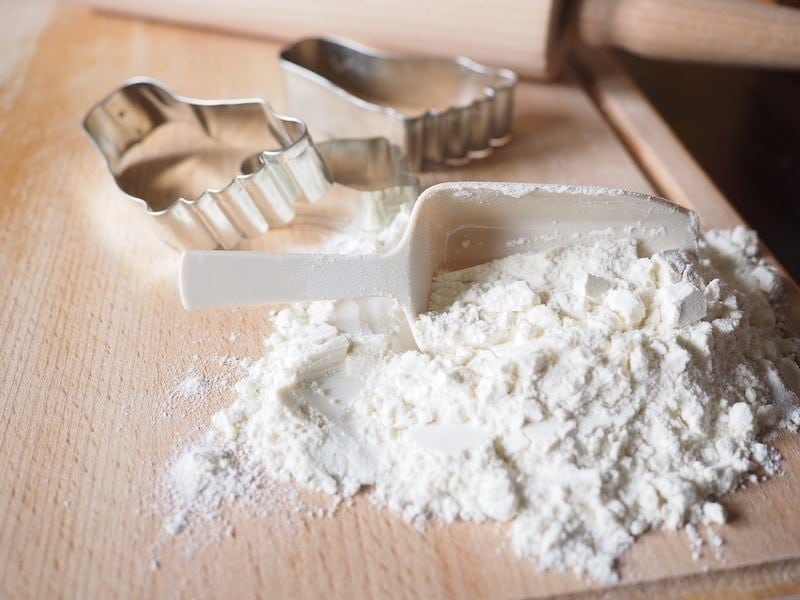 This is a tricky one. The short answer is yes and no. If we’re talking about traditional wheat flour, then the answer is, unfortunately, a definite no when it comes to Whole30.

If we’re talking specifically about flours made from Whole30-compliant ingredients such as coconut and almond flour, then the answer is a tentative yes…with some stipulations. We’ll get into that later.

Why Traditional Wheat Flour is Not Allowed on Whole30

Well, flour is made from wheat, and wheat is not allowed on Whole30 for the same reason that many other grains like rice are not allowed—due to the protein structures (in gluten in particular), it can be very difficult for our bodies to digest.

Whole grains also contain anti-nutrients called phytates that bind to important vitamins and minerals and render them unavailable to our bodies during the digestive process. Bummer, right? You don’t want to miss out on all that goodness in your food, do you? Because wheat (among other grains) may cause more harm than good to our tummies, it does not make the cut on the Whole30 Program.

Flour is also often refined—meaning that in the production process, the germ and the bran are removed, stripping most of the nutritional value that the grain even had to begin with.

Because of this, most flour-based foods end up being empty calories or “foods-with-no-brakes”. Because they retain next to none of their intended nutritional value, consuming them spikes our insulin due to their carbohydrate-dense nature but contains very little fiber, protein or fat to slow down their intake, leaving us feeling, quite frankly, still hungry.

So we know grains, and therefore grain-based flours are out of the question…but what about flours made from Whole30-approved ingredients? Coconut flour and almond flour are extremely popular in the paleo, grain-free and gluten-free communities. If almonds are okay to eat on Whole30, almond flour should be too, right?

The answer to that question is a little bit complicated. Yes, these approved-ingredient-based flours are allowed in the right circumstances. What we’re trying to avoid here is a SWYPO food situation. SWYPO (“or sex-with-your-pants-on”) foods are what the creators of the Whole30 Program cheekily decided to call foods that are technically compliant based on an ingredients list, but ultimately end up being slightly sad replacements for foods we may feel deprived of.

Imagine a Whole30 Brownie recipe made from ingredients like sweet potato, almond flour, cocoa powder and cacao nibs (we actually have a collection of Whole30 dessert recipes like this for those who have passed the initial 30 days). Each individual ingredient is fine on its own. Put them all together and you get a (most likely) very unsatisfying version of the gluten-filled, sugar-bomb brownie you’re truly craving.

By seeking out these SWYPO foods, we end up indulging in those cravings that we have been conditioned to “need”. We don’t really need dessert, do we? So why would you torture yourself with a sad, unsweetened vegetable brownie?

When Alternative Flours Can Be Used (Avoiding SWYPO)

That being said, these alternative flours can be used in some scenarios while still following Whole30 protocol. If you’re using these flours to make a sauce or gravy, bind together meatloaf or meatballs, or add a “breading” to your chicken , by all means go for it! It’s those paleo pancakes, muffins and other foods-with-no-brakes you’ll want to stay away from.

It’s those paleo pancakes, muffins and other foods-with-no-brakes you’ll want to stay away from.

Whole30 is about resetting and breaking habits—both physically and psychologically. By avoiding not only non-compliant foods, but also those pesky SWYPO foods and telling yourself that you don’t need them after all, you’ll likely notice a huge shift in your relationship with food.

What are your favorite alternative Whole30 flours? Share your thoughts in the comments!