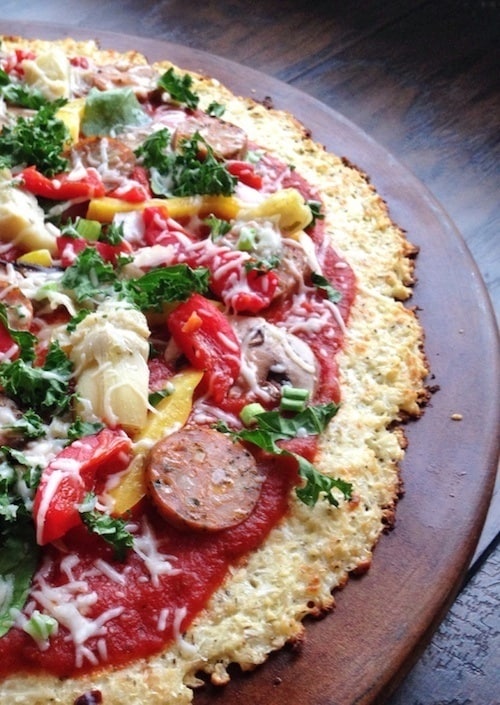 Isn’t pizza just the best? And it sounds like you’re ready to give cooking a Whole30 pizza a shot – more power to you! Just know that it won’t taste much like pizza.

Sure, cauliflower and sweet potatoes are all well and good, but let’s admit it – they aren’t going to make up for the bready dough that constitutes the majority of pizza.

So I’m a little worried about why you’re here. Maybe you just saw a Domino’s add for a $5.99 two topping pizza, and now you’re desperate for a taste of that delicious pizza pie. Now, you probably want to try making your own compliant Whole30 pizza.

There’s a name for this effect – it’s referred to as SWYPO (Sex With Your Pants On). It’s a Whole30 syndrome where we want to re-create our favorite meals as Whole30 approved dishes (other common SWYPO attempts include paleo ice cream, pancakes, etc). However, the truth is that nothing you can make on Whole30 will taste like the pizza you know and love.

Now these recipes are awesome, and these “pizzas” taste great. However, if you’re going to eat these and end up feeling disappointed, bummed about what you can’t eat (rather than embracing what you can eat), and walk away feeling slightly bitter and still craving pizza, I’d say turn back now my friend.

If you think you can whip up a Whole30 pizza and not be crushed by it’s lack of similarity to your favorite delivery spot, then go for it!

With all that being said, here are four compliant Whole30 pizza recipes we think you’ll love (despite not being the real thing).

This pizza features a sweet potato crust – grab the recipe here over at Amazon Ashley. A great Whole30 pizza crust recipe – just beware the toppings (no cheese and only compliant bacon of course)!

This breakfast pizza isn’t exactly a pizza – it’s a quiche that tastes remarkably like a pizza. So if you’re craving the crust, this might not satisfy you, but the pizza-ness of this dish is still remarkable!

This Whole30 breakfast pizza recipe, which comes from Jays Baking Me Crazy, features coconut milk, ghee, eggs, and a blend of spices plus toppings.

Remember – don’t use pepperoni unless it’s Whole30 compliant (which will be pretty darn tough to find). Also read your labels on the pizza sauce – or make your own (leave out any sweeteners or sugars – but red wine vinegar is fine).

This Whole30 deconstructed pizza recipe from Dr. Oz includes ground beef, baby spinach, black olives, tomato, rosemary, and oregano – that’s it! Quick and easy to make, this one is a must-try.

If cauliflower can be used to make rice, why not a pizza crust? Grab this cauliflower pizza recipe from Clean Eats and Treats that includes cauliflower (naturally), almond flour, eggs, nutritional yeast, and just a few other spices.

Note: Make sure to only follow the recipe for the paleo cauliflower pizza – the whole family pizza recipe underneath it is not compliant.

This is one of the few “pizzas” that are truly 100% Whole30 compliant, so if you’re sticking to round one rules, definitely make sure to try this recipe!

This Whole30 pizza with chicken, bacon, and ranch comes from Eat the Grains, and it actually consists of pizza-like toppings places on top of cut sweet potato rounds. Since it’s really not imitating baked goods, it’s not considered SWYPO (Sex With Your Pants On), and is allowed during the Whole30 program!

Not a fan of sweet potatoes? Don’t worry, we have another 100% compliant Whole30 pizza dish for you to enjoy straight from the kitchen of Paleo Running Momma. This “pizza” uses a deconstructed style featuring pizza sauce, tomatoes, and pizza seasoning alongside mushrooms, sausage, and other pizza toppings for a grain-free and bakery-free pizza alternative.

This tasty Whole30-friendly pizza comes from The Almond Eater and uses a cauliflower rice and almond flour crust, along with healthy toppings like arugula and prosciutto!

This top-notch paleo pizza is from Just Jessie B and features a cauliflower and coconut flour crust, with ‘shrooms and Whole30 compliant sausage for toppings.

This pizza frittata recipe comes from Cook At Home Mom is another pizza that won’t break any round one rules, since it opts for eggs in lieu of a crust. Top that frittata with some of these tasty pizza toppings and this dish is a winner for any meal, breakfast or dinner!

That does it for our Whole30 pizza list! Just don’t forget that pizzas using cauliflower crust aren’t technically allowed for your first round of Whole30 – but they are completely paleo-friendly! If you’re sticking to round one Whole30 rules, opt for the egg and frittata pizzas and the deconstructed pizzas only!

Any great Whole30 compliant pizza recipes we missed? Let us know in the comments!