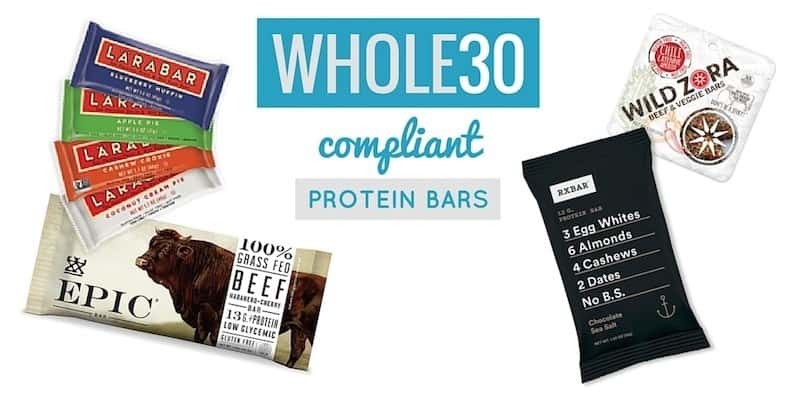 Meal bars are great for when you’re on the go – sometimes with our crazed and hectic lives, there just isn’t time for a sit down meal!

However, finding the right kind of bars can be a bit tougher on Whole30 – not just any old bars will do of course, since you’ll need to seek out protein bars that don’t have any added sugar or strange additives (and sadly, for many “health” bars, sugar and additives are the norm).

There are actually a few different Whole30 bars that you can use on your program, and we’ll detail them here to help with your program (plus show you where you can order them).

Epic makes Whole30 compliant protein bars, along with jerky sticks, and bite packs (packs of protein bites), that are responsibly sourced from farmers who raise animals that are vegetarian fed, humanely treated, hormone-free and antibiotic.

Their commitment to healthy snacks has earned them a spot as an official Whole30 partner, and they’re a great option for Whole30-ers who want some quick and tasty protein bars to get them through their program, guilt-free.

Epic Bars even offers a Whole30 starter kit! This starter kit is packed with 16 varieties of jerky, protein bars, and bites that are Whole30 approved to jumpstart your program and ensure that you always have some emergency foods on hand!

Note that while most Epic bars are Whole30 compliant, a couple of the bars contain brown sugar, which makes them not allowed on the program. The bars that contain brown sugar are the Bison Bacon Cranberry and the Wild Boar Bacon – so avoid those! Always double-check ingredient lists to be safe, as ingredients may change.

Epic Bars Not Allowed on Whole30:

Where to Get Them: You can purchase Epic bars and snack bites on the Epic website, Amazon, or for 25% off at Thrive Market.

These tasty sugar-free, Whole30-friendly bars are available in many flavors such as Chili Beef with Kale and Curry Masala Turkey with Spinach and Dates.

Where to Get Them: You can purchase Wild Zora Bars on the Wild Zora website, online on Amazon, or for 25% off at Thrive Market.

DNX Bars are another meal bar company working as official partners with the Whole30 team! DNX Bars provides healthy protein bars made of grass-fed beef & bison, and free-range chicken, along with organic fruits and vegetables.

DNX Bars even has a Whole30 Starter Pack, offering a deep discount on their most popular Whole30-compliant bars and sticks. The pack contains 6 bars (2 of each) and 6 sticks (3 of each) in the following flavors:

We’ve covered the Whole30 protein bars that are officially endorsed by Whole30.

The following protein bars are Whole30 compliant, but are not endorsed officially by the Whole30 program. The reason for this is that – while these bars are made with the highest quality, real, and authentic ingredients – they do make themselves susceptible to eating abuse.

The problem is that some of these bars are dried fruit and nut bars, and taste sweet – almost dessert-like. They don’t have any sugar that isn’t fruit, so they are Whole30 compliant, but some people end up inadvertently using these sweet fruit bars to quell their sugar cravings.

However, just to be clear, the bars listed below – Larabars, RxBars, Beaver Bites, and Yawp Bars – are still Whole30 compliant. You can absolutely buy and eat these on Whole30. Just don’t abuse them by becoming reliant on them for a sweet fix. Only use these bars as an emergency food.

Now that we’ve made all that clear, let’s cover the rest of our Whole30 protein bars.

Larabars are one of the more popular Whole30 bars, likely due to the fact that they are easier to find in stores (they are common in health food stores, Whole Food grocery stores, and Trader Joe’s).

These bars are GMO free and made with only real recognizable ingredients.

Where to Get Them: You can find Larabars at several physical locations or on Amazon or discounted at Thrive Market.

RxBars are authentic paleo protein bars with no BS ingredients – in fact, RxBars never have more than 7 ingredients, which already sets them apart from the vast majority of “protein” bars.

RxBars use simple, clean, whole ingredients with no whey, no soy, no dairy, no GMO, no gluten, no added sugar, and no other additives.

Each Rx Bar contains 15 grams of protein from dried egg whites, making RxBars basically a complete mini-meal. Each bar also contains around 30 grams of carbohydrate from fruit, and between 7 and 14 grams of fat from coconut meat and oil.

RxBars come in numerous tasty flavors, and it’s awesome how the ingredients are listed right on the package – no tricks or deception here.

Some RxBars are quite controversial, most notable the bars that include chocolate as an ingredient. While these bars are compliant from an ingredient standpoint, many Whole30-ers do not use them and even consider them against Whole30 since they can easily be used to feed your sugar dragon and satisfy your sweet cravings, rather than help you overcome them.

We recommend having a few RxBars on hand for emergencies only, and generally avoiding them when possible.

The good news is that the chocolate in RxBars is ground cacao nibs, with no sugar added, so it is indeed a compliant ingredient, as shown from this tweet by an RX rep below:

Rx Bars Not Allowed on Whole30:

Where to Get Them: You can order RxBars online

Pressed By Kind bars are produced by Kind, but are simple fruit and nut bars, which are Whole30 compliant.

Where to Buy: Available online and in stores. Grab this variety pack of Pressed by Kind bars on Amazon to try a mix of these tasty flavors!

Thunderbird makes paleo-friendly fruit and nut bars that can serve as great emergency eating items. Many Thunderbird bars are Whole30 compliant, including:

Other Thunderbird bars are technically Whole30-compliant ingredient-wise, but I think many will take issue with the mix of cacao and fruit, resulting in a very dessert-like taste. These are most certainly considered SWYPO (Sex With Your Pants On) and should probably not be enjoyed until after your initial 30 days:

Where to Buy Them: Thunderbird bars are available in some stores as well as on Amazon – check out their variety pack!

Do you know of any awesome Whole30-friendly protein bars we left out? Share your favorites in the comments (or tell us your favorite flavor of the bars listed here)!