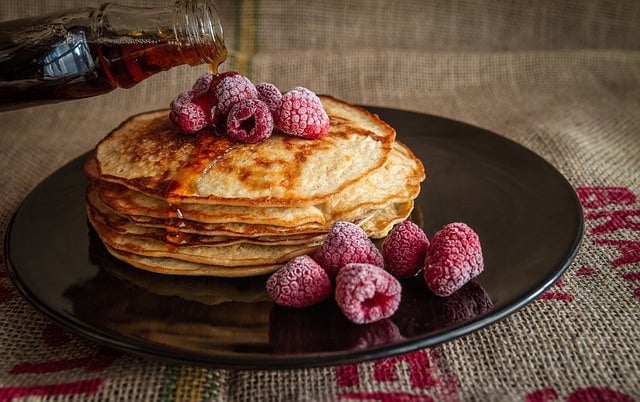 Flapjack fans may be wondering – can I have pancakes on Whole30?

No – pancakes are not allowed on Whole30.

Traditional pancakes include flour, milk, butter, sugar, and other ingredients that aren’t allowed on Whole30.

There are paleo pancake recipes that use almond flour and other compliant ingredients. While paleo pancakes are fine for continuing after the 30 day mark, during Whole30, even imitating baked goods and other crave-worthy items is not allowed.

In Whole30 culture, this is referred to to SWYPO (Sex With Your Pants On). You are trying to satisfy your cravings by making a non-compliant food with compliant ingredients. The goal of Whole30 is to break those cravings, so weaseling around them isn’t in the spirit of the program. Plus, it won’t be nearly as good as the real thing.

To quote the official Whole30:

Pancakes in any form do not encourage success with the Whole30 program. Reaching your health goals depends on committing to both the rules and the spirit and intention of the program. The Whole30 is designed to change your relationship with food, first and foremost. And the psychological impact of eating pancakes as part of your healthy eating, life-changing plan cannot be ignored.

Eating eggs, a banana, and some olive oil is not the same as combining those ingredients into a pancake. There are studies that show that how your brain perceives the food influences satiation….Pancakes bring up a totally different psychological response than frying some eggs and eating a banana. And it’s that psychological response that we are trying to target with the program.

So no, you absolutely can’t have pancakes on Whole30.

However, after your 30 days, many folks choose to transition to a paleo diet, which is generally a more relaxed version of Whole30.

With paleo, you absolutely can have paleo pancakes. Here are a few recipes we’d recommend: