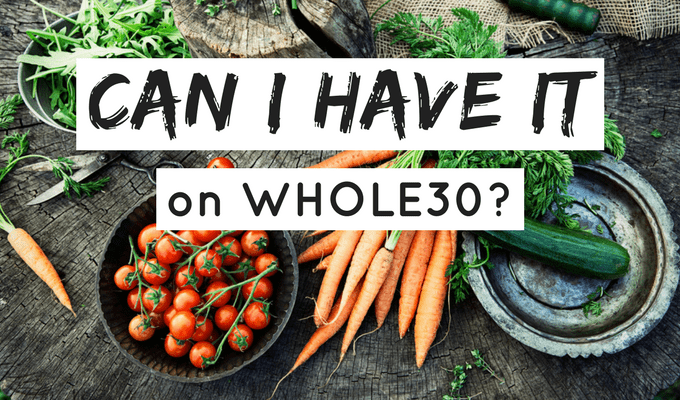 Welcome to our Whole30 “Can I Have It?” guide, where we cover some of the most common food FAQs from new Whole30-ers!

can you have fruit on Whole30?

You sure can! You are allowed and encouraged to add one serving of fruit occasionally with each meal. It’s recommended not to treat fruit as a dessert, eating it after your meal. Instead, consume your fruit as part of your meal, right alongside your protein and veggies!

can you have Larabars on Whole30?

Larabars are a tricky topic. Technically, the ingredients are compliant. However, they’re generally not recommended, due to the high susceptibility of abuse.

You see, Larabars are composed of fruit and nuts. All that packed dried fruit can be quite sweet. As a result, it’s very easy to treat Larabars as a substitute dessert in order to quell your sugar dragon.

For this reason, they are not officially endorsed or encouraged. However, many folks still opt to use them – just be especially vigilant around how you’re using them.

For more info – including what bars are and are not compliant – read our Whole30 Larabar guide!

can you have potatoes on Whole30?

Potatoes used to be be banned on Whole30, but the rules have since changed, and now potatoes are absolutely allowed and encouraged! They’re a great filling starch that works well in a wide variety of recipes.

For more info, read our full post on “Can You Eat Potatoes on Whole30?”

can you have popcorn on Whole30?

Nope – popcorn is a corn kernel, and corn isn’t allowed on the Whole30 program!

Read our article all about popcorn on Whole30 here for more info.

can you have quinoa on Whole30?

While quinoa is a healthy grain, it’s still a grain, so it’s out on Whole30. For more detail, see our full article on why quinoa isn’t allowed on Whole30.

can you have arrowroot powder on Whole30?

Yes, you can! Arrowroot powder is great for thickening sauces, marinades, and gravies. However, it shouldn’t be used in baked goods.

The reason for this? Whole30 is against participants trying to re-create their favorite baked goods like pancakes or muffins. Part of Whole30’s goal is to break the emotional bonds we often have to comfort foods, and baked goods often fall into this realm.

That’s why baked goods (even technically compliant ones) are off the table on Whole30!

can you have tapioca starch on Whole30?

Yup – like arrowroot powder, tapioca starch can be great for thickening sauces. However, it too shouldn’t be used for any kind of baked good.

can you have plantains on Whole30?

Yup – plantains are fine on Whole30! However, remember that store-bought plantain chips are not OK (see our “Can You Have Chips” item for more details).

can you have beansprouts on Whole30?

Beansprouts are indeed allowed on Whole30. This is because the part of the beansprout you’re eating is actually the plant section. It’s the actual bean (or seed) that can be an issue. Make sure to read our article on beans to understand more about why legumes aren’t allowed on Whole30.

can you have cacao on Whole30?

Yup, as long it’s 100% cacao, it’s fine. Cacao is great for a spice rub, seasoning, or even adding to your coffee.

However, even 100% compliant cacao shouldn’t be combined with dates or fruit to imitate desserts – that’s SWYPO!

Also, just FYI, don’t get too excited about cacao powder. It tastes nothing like chocolate, so don’t get your hopes up (speaking from experience).

can you have Buckwheat on Whole30?

No. Buckwheat is considered a “pseudo-cereal” which means that, while not technically a grain, it contains some compounds similar to grains that are suspected of causing digestive issues. For that reason, it’s out!

can you have tahini on Whole30?

Yes! Tahini is a paste made from sesame seeds. Since sesame seeds are compliant, so is tahini. However, you need to check your labels with this one, as not all tahini is made equal. Some are definitely going to have non-compliant ingredients.

can you have vanilla extract on Whole30?

Weirdly, no. This is because alcohol is out on Whole30, and vanilla extract contains alcohol.

I know, it’s a tiny amount of alcohol that no one really cares about, but the Whole30 team is vigilant about the rules, and making a few exceptions can begin a slippery slope.

However, vanilla bean powder is in, and it can generally be used as a vanilla extract substitute.

can you have chia seeds on Whole30?

Yes, chia seeds are allowed on Whole30! It’s a bit confusing, but chia seeds aren’t part of the same seeds family that is cut out of Whole30 (there’s another kind of seed that is closer to legumes and grains, and those seeds aren’t allowed).

However, chia seeds should still be treated the way nuts are – consumed in limited quantities!

can you have flaxseed on Whole30?

Yes you can, for the same reasons as above.

can you have gum on Whole30?

No. This is because all gums contain some form of added or fake sweeteners, which aren’t allowed on Whole30.

can you have stevia on Whole30?

Stevia is a popular sweetener that is marketed as more natural than others. And it’s true – it’s less processed than others of its ilk. However, sweeteners are sweeteners, and stevia is out on Whole30.

can you have chips on Whole30?

Yes and no. Your favorite brand of potato chips – no way. In fact, all store-bought chips (even ingredient compliant ones) aren’t allowed.

Chips tend to be one of those foods that most of us have a hard time putting the breaks on. As a the Pringles commercial notes – once you pop, the fun don’t stop.

However, you are absolutely encouraged to roast, bake, or lightly pan-fry your own potatoes, plantains, turnips, or beets into homemade chips!

BTW, this rule goes for fries too – nothing commercially fried or prepared is OK, but you can make your own.

More Common “Can I Have” Questions:

Any more Whole30 “Can I Have It” questions? Comment and we’ll do our best to help!